To commemorate its 110th anniversary this year, Laddsworth Primary School in Hilton is celebrating with one or two memorial events every term.

As part of the second term commemorations, all of the school's 564 pupils and 54 staff gathered on the rugby field to form a huge "110" numeral, pictured here. 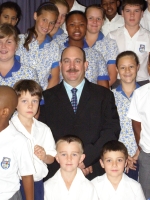 "Work hard and play hard" is one of the mottos that the new principal of a local primary school brings with him to his new position.

Gavin Lambooy (47) took up the post of principal of Laddsworth Primary School in Hilton at the start of the second term. He was previously deputy headmaster of Merchiston Boys' Preparatory School in the city.

The range of 110th anniversary merchandise pictured here is available from the Laddsworth school office. See Mrs Rajah for order forms and goods. The costs are as follows:
Continue Reading
The School Governing Body is pleased to announce the appointment of a new headmaster from April 1, 2013. We look forward to welcoming to Laddsworth Mr Gavin Lambooy (46), who is currently Deputy Headmaster at Merchiston Boys' Prep School in Pietermaritzburg.
Mr Lambooy has been Deputy Headmaster since 2000. He joined Merchiston in 1990 and holds a Further Diploma in Education from the-then University of Natal.
Mr Lambooy will take up his position from the beginning of the second term, Monday April 8, 2013.
Continue Reading

Laddsworth Primary School in Hilton celebrated its 110th anniversary in early March. As part of its commemorations, all of the school's 564 pupils walked the short distance from the school to the garden of remembrance at the Hilton Anglican Church. There they laid flowers on the memorial stone of the school's founder, Daisy Ladds, whose remains are interred there. Later they celebrated with a sweet treat in the form of celebration cakes for each grade.
Continue Reading