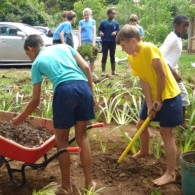 A Grade 6 class at Laddsworth Primary School in Hilton has taken its classroom learning outdoors and applied it for the benefit of the environment and the school community.

After learning about soil erosion and animal life in the soil in Natural Science, pupils identified problem areas on the school property and then brainstormed solutions.

"As a way to make their learning practical and take ownership of it, they decided to rehabilitate a badly eroded bank outside a Grade 7 classroom," explained the class teacher, Nikki Stokes. "Because it is next to the classrooms they will occupy in 2013, I am hoping they will continue to maintain and protect it next year too."

To rehabilitate the bank, pupils contributed materials brought from home: Soil, compost, grass runners and plants: succulents, Hen and chicks, and Day lilies. On a chosen day they set to work with garden tools brought from home to dig, move wheelbarrow loads of soil and then plant a new flower bed. For top soil, they used soil they reclaimed from stormwater gutters that were blocked with material washed off the eroded bank.

"The class did it all themselves, including carting wheelbarrows of soil and I am so proud of them," Stokes said. "They were keen to make a difference, worked hard, got dirty and had a lot of fun. They even saved and put back into the soil every single earthworm they found, because they had learned about how they are good for the soil," Stokes said.