The Hilton Road School was founded on March 1, 1903 in the old Hilton Road Hall. The children, who used slates and a slate pencil, sat around a large table while Miss Daisy Ladds went to each child in turn in order to help them with their lessons. She gave instructions on a large blackboard on a stand. One little girl whose home was at The Knoll arrived at school in a horse trap. Another two came on a donkey with a wickerwork two-seater saddle.

The number of pupils at Miss Ladds' school increased steadily and an assistant later joined her. In April 1914, the school became Government aided and on 1 August 1918, it was taken over by the Natal Education Department under the Free Education Act and became the Hilton Road Government Primary School with Miss Ladds as Headmistress.

The school catered for children all around the district including Cedara and Merrivale, the train being the chief form of transport for these pupils. The children from Cedara were taken to and from the station to the school by mule cart. A highlight of the year was the Annual Sports day, held on the village playing field and the most keenly contended event was the Tug-O-War against St Anne's pupils.

In 1920, a second assistant was appointed and there were sixty children on the roll. Because of the larger number, a temporary partition was put up in the hall but it was not the solution and was subsequently removed.

The tone of the school was set by its first principals and by long serving members of staff. Laddsworth has been fortunate in having had only six principals in its almost hundred years of existence and three lady teachers gave many years of devoted service. In 1927, the first long serving teacher was Miss Alma Rogers, appointed to introduce Afrikaans. In 1935, the second teacher was Miss Bo Pringle. They were both to stay happily at the school until the end of l946, when they both left, Miss Pringle ending her career as headmistress of Northern Park School. She was also an outstanding teacher with a deep love of children and a wide range of interests. She too fell under the influence of 'Laddie', as Miss Ladds was known.

The classes in the old hall sat back to back and were divided by a paper screen, which necessitated great concentration on the part of the children. When a dance was held in the Hall over the weekend all the school pictures had to be removed from the walls and all furniture moved out. On a Monday morning, the blackboards and easels 'waltzed' over the floor, whenever they were used because so much powder had been sprinkled over the floor for dancing.

The new school building above Voortrekker Road was occupied on the 25 January 1937. The official opening by Mr. W M Power took place on 23 February. Unfortunately, the building with its three classrooms was too small to accommodate 71 pupils in four divisions. The result was that to the great discomfort of the infant classes, not to mention Miss Ladds, the 24 pupils were housed in the office. After representations, a further classroom was built and occupied in January 1938.

Assembly was held in the first classroom on the verandah, each room having a coal stove in the corner for winter warmth. Behind the school, the bare rocky ground sloped down towards the station and it was Miss Ladds who organised the levelling of the playing fields. Aided by a small monetary grant, a few Zulu labourers, some borrowed wheelbarrows, a scraper and four oxen, this indomitable lady achieved amazing results. In the late 1930's, a part-time training instructor gave woodwork lessons in the Public Hall for which the secretary charged seven and sixpence per month.

Through the offices of the Headmaster of Hilton College, their instructor Mr. Percy Bould, another legendry character, gave physical training lessons twice a week. Miss Ladds retired officially in 1942, when Miss D Norenius took over as principal. This was not the end of Daisy Ladds service however, as she was to continue teaching at the school as an assistant until 1949, a period of 48 years in all since she first started teaching at Uplands School in Pietermaritzburg. 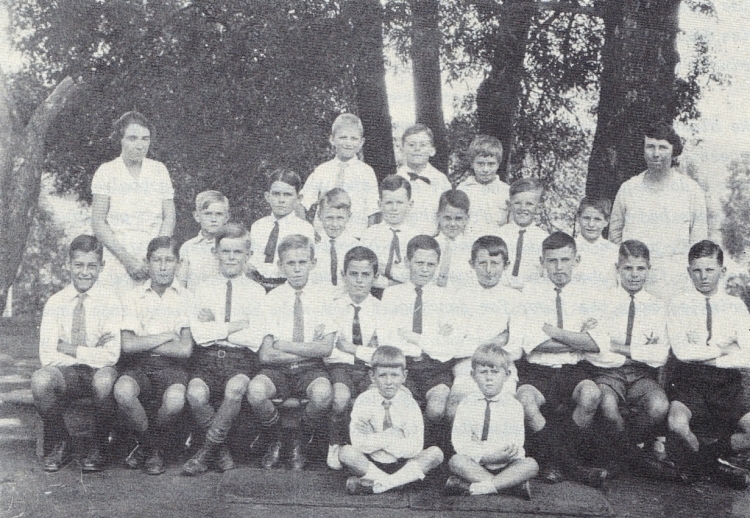 Mrs. M R Nicoll was appointed principal in 1947 on Miss Norenius resignation (1942-1947) and was greeted with 27 days of mist! They must have kept good weather records at the school! As she was unable to rent a property in Hilton Road, she boarded with the owners of Sundale Kennels and walked to school, as she had no means of transport. On one occasion, a bazaar was organised at the school, which in those days was completely against regulations. The worst happened. It was on the very day that the music inspector had decided to visit. However, the day was saved when he heard one of the items on the day's programme. It was 'The band of the reed pipers'. Mr. Robinson, a stall-member, had taught the children how to make and play reed pipes. So delighted was Mr. Wright the Music Inspector that he arranged for the children to be heard on the radio!

With Mrs. Nicoll, began the career of the third longstanding teacher. This was Mrs. H J Pretorius, who was to remain at the school until January 1972, a period of 22 years. Her love for and the command of her language led her to be an excellent teacher of Afrikaans. Mr. I J van der Vyver assumed duty as principal in January 1948. This benign gentleman had a magnificent sense of humour and was a brilliant public speaker. He was a good administrator and had the knack of delegating the organization of events at the school to the most suitable staff member. Under his principalship, Laddsworth was to further grow and develop.

Mr. van der Vyver felt very keenly that Miss Ladds should have the satisfaction of knowing that her life's work at the school should be honoured. To this end, he petitioned the Education Department to change the name of the school to LADDSWORTH and this took place on 24 February 1956. On March 1 of that year at a celebration attended by over 200 people, many of them past pupils, Miss Ladds unveiled the brass plate at the entrance of the school bearing her name and the foundation date. Daisy Ladds died on 13 March 1964 and her memorial plaque can be seen in the grounds of the Church of Ascension.

Mention must also be made of three other members of staff whose loyalty to the school is meritorious. Two of these are Mr. Daniel Ndlala who became the School Induna and retired in 1990 and Mr. Andries Ndlovu who both started their service in 1957. Mr. Jack Zuma retired in l957 after 23 years of service. All members of staff and pupils admired this gentleman. The lights of the school were often on at nine o'clock at night while he completed his days' work to his satisfaction. If young lady teachers visited the town in the evening, Jack Zuma was there to meet them from the train and escort them home. 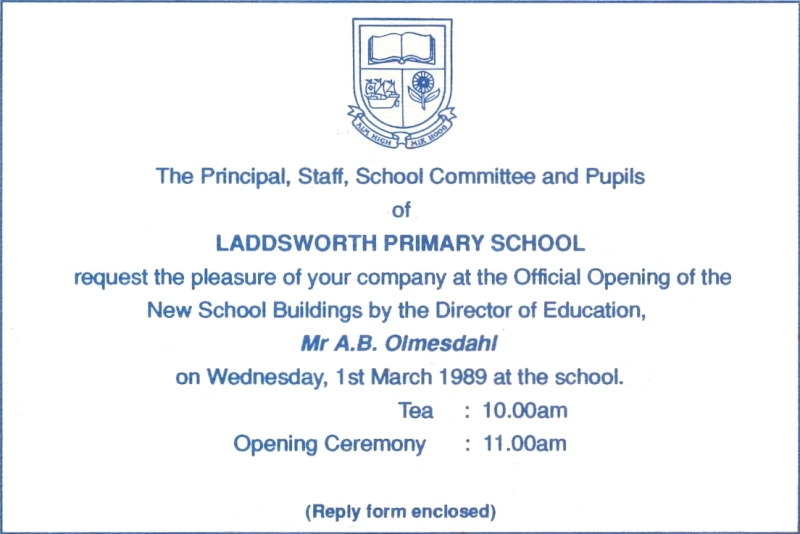 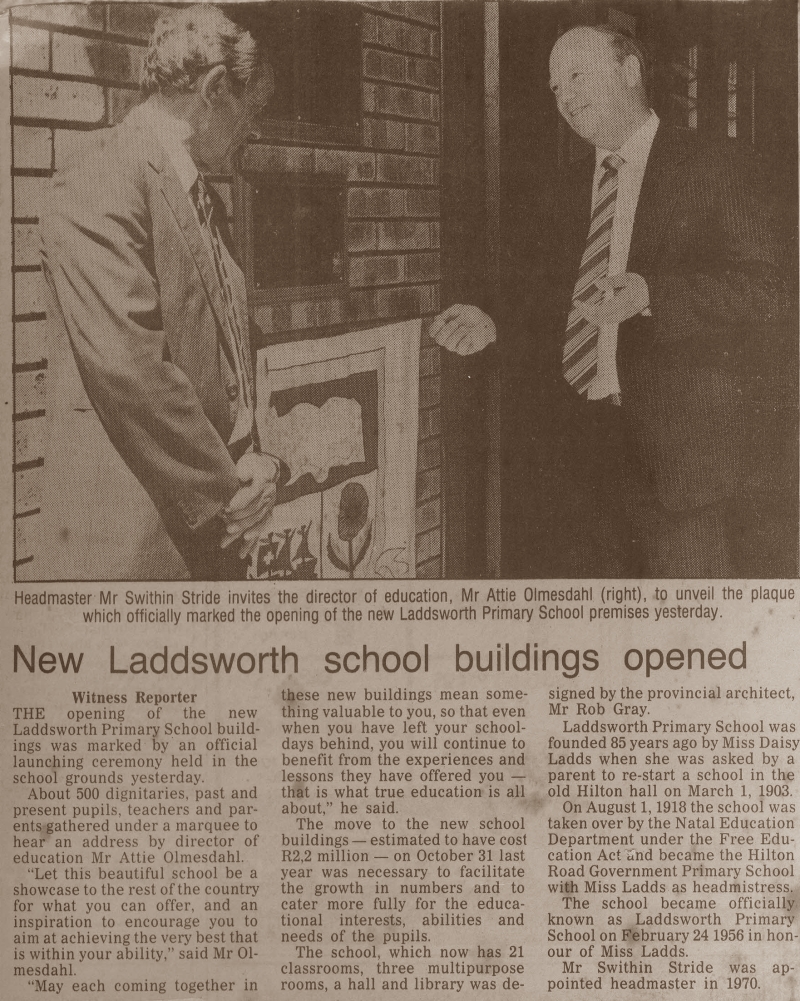 Mr. van der Vyver retired and Mr. Swithin Stride assumed duty in January 1970. His appointment coincided with further development of Hilton caused mainly by the opening of the double highway, which allowed quick and easy access to Pietermaritzburg. He was a well-loved and respected educator. Eighty-six years onwards on March 1 1989, the official opening of the new Laddsworth School took place, the guest of honour being the Director of Education Mr. A B Olmesdahl who in his opening speech referred to the many humorous and interesting anecdotes that had occurred over the years. Mr. Swithin Stride retired after over twenty years' service to the school.

Mr Stride was followed by Mr. Leigh Franklin, headmaster from 1993 until 1994.

An acting principal was in place until the arrival of Dr. Glynnis Prinsloo in 1997. She was Headmistress thereafter until August 2002. Mrs. Shelley McCullough was Acting Principal from August 2002 until May 2003, when Mrs. Anne Tarr took over the reins.

Mrs. Sally Kelly accepted the role of acting principal from the second term in 2012 the end of March 2013 when Mr. Gavin Lambooy was appointed.

Mr. Gavin Lambooy took up the post of headmaster of Laddsworth Primary School in Hilton at the start of the second term in 2013. He was previously deputy headmaster of Merchiston Boys' Preparatory School in the city.

The school currently accommodates 565 pupils of all races in a uniquely designed and extensive complex of buildings, which blends with and encapsulates the rural atmosphere of Hilton. The modern school includes a sizeable hall, newly extended media centre as well as multi-purpose and specialist classrooms, together with full sporting facilities.